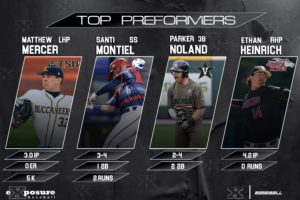 Matthew Mercer went 3 innings and gave up 0 runs and added 5ks while getting the win for ETSU.

Parker continued his hot ways going 2-4 with 2 doubles in a win for Vanderbilt.

Heinrich was lights out in relief going 4.2 innings and giving up 0 runs and getting the win against Georgia.

Hagenow added a double in a win for MTSU.

Behrends added 2 doubles and a run scored in a big come from behind win for Belmont.

Ethan had a big game for the Bucs going 2-3 with a triple, RBI, and run scored in the win.

Gilbert added a hit, RBI, and run scored in a come from behind win.

Rhodes added another double and RBI in an extra inning win for Kentucky,

Brayson was lights out in relief against #2 Texas Tech.  He went 3 innings and gave up 1 run while striking out 4.

Hudson went an inning of scoreless relief and added 2 ks in a win for New Mexico.

Chick added a home run for the Cornhuskers against Arizona.